Not the same old switcheroo. 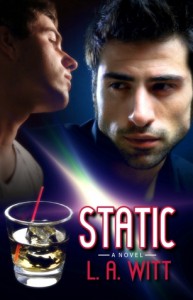 "Step right up, see the fourth-floor freak show! What once was a woman is now a man, have a peek, have a look!"

(internal monologue from the main character)

It wasn't hard to root for Alex and Damon because I felt for the two of them, being thrown into a strange situation together without warning. Alex was forced to live in his male body full time; Damon had no clue his girlfriend was actually two sexes.

Books like these always raise the "What would you do?" question. Would most people be able to see the person inside of the shell? Would I?

It's a tough question to look at. Some relationships crumble over things like weight gain, or other physical changes which are far less minor. I think even the strongest of relationships would be put through the ringer if one person revealed themselves to be something or someone else, especially if it could become full time and permanent. Even putting any sort of secrecy aside, it would be a challenge to look at a person and try to see them for who they were before, merged with who they are now, which is why I was fascinated with how everything was going to unfold.

I was pleased to see that the book didn't skimp on the story for the sake of sex scenes. I liked that the mood fell closer to a dramatic story for the sake of realism. There was no way that a sex scene could happen too early in the book or any sort of sex (whether it was between the two main characters or showing them with other people) wouldn't have felt organic to the progression of events. This is one instance where it was important (in my mind) to have the characters take their time figuring out who they were and who they needed to be.

As far as stumbling blocks...I might have had some issues with the preachy moments. I believe that if a story is good enough on its own, the message will come through without having to beat people over the head with the point. If the story is a success, readers will most likely examine their feelings in the process.

For the sake of characters, I probably preferred Damon's PoV to Alex's. While it must have sucked to be Alex and stuck in a situation beyond his/her control, I think as a reader, I was more curious to see where Damon's head was at. It was easy for me to skim Alex's chapters because I had less of an interest in his work situation (yes, it was partially a coming out story, but the draw here for me was in the Damon/Alex dynamic).

Overall, I thought it was an interesting read, if a little heavy handed at times with the execution.