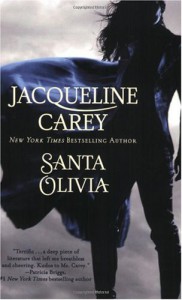 It's probably wrong that this is the second Snakes on a Plane thought I've had in weeks (be glad I didn't post the pic of snakes falling from the plane), but when I think of falling snakes, it's either that or Indiana Jones.

I am review-lazy this week, so I'll give a fast run-down of why I REALLY liked Santa Olivia :

The story was dark. It was strangely apocalyptic and/or screwy militant who-knows-what in form. I don't fully understand how death, disease, grudge-match boxing, sinful clergymen, and mutated people with wolf genes all work together to make a cohesive story, but somehow, it does work.

The emotional connections were off the charts. I love when a story is about so much more than just a romance. The relationship between mother and child, brother and sister, and two fellow orphans becoming lovers, were all of equal importance.

I GOT SUPER EMOTIONAL FEELS. TWICE. OR THREE TIMES. MAYBE EVEN FOUR TIMES.

The setting felt like another character. I pictured the church yard and the statue of Santa Olivia in my mind. I was nervous when Loup was in places she shouldn't be hanging around because I could practically see the danger lurking in every corner.

I'd highly recommend this book for fans of darker, unique, or emotional stories. For an Urban Fantasy, it was less about ass kicking or bizarre non-humans, and more about survival and tackling hardships. I loved the everyday struggle of the characters fighting to survive.

There is a f/f romance, but for those unsure if they'd enjoy reading a non-m/f or m/m, I'd say to give the book a chance because it was handled beautifully and tastefully. The slow build eventually burned into something lovely to witness.