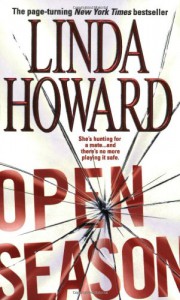 There isn't much more to say than what this picture will cover because the word "condom" was used a couple dozen times in this book.

There were seventy-two condoms purchased in the production of this story.

Maybe she needed to warn Chief Russo to keep a close eye on aisle five at Clud's Pharmacy, because judging by the variety offered here, there were some hinky things going on in Hillsoboro.

No, hinky was not a typo. I swore it was kinky the first time I read it, which would have been even more appropriate.

You might want me to mention something other than the copious condom usage, perhaps?

My thoughts about the success of the story itself : Open Season was a fun little small-town romance. I was surprised that the subject of sexual trafficking ended up being shoved to the background, given the seriousness of the prologue. In all honesty, I would have preferred the author to have shown more about the girls in the story and what they were going through, instead of focusing so much on Daisy's small-town adventures.

This is my fourth Linda Howard book and while it was an entertaining read, it was not up to par with the last three books I read of hers, which were all on a four to four and a half star level (really, they were all fabulous). The story itself revolves around a woman discovering that she's ready to find a husband, so she gives herself a makeover and looks for men in all the wrong ways. The local sheriff is amused by this and playfully trails her to keep her out of trouble, where (as anyone would guess right away) sparks eventually fly. The suspense element is almost an afterthought, when Daisy ends up witnessing a murder and is dropped into the middle of finding out about an organized sexual slavery trade.

But really, I should have just stuck to my game plan of showing off a wall of condom quotes because that's about all I'm going to remember from Open Season. However, I should leave some element of mystery and not give too much of it away, so I'll only leave you with one more excerpt.

A peculiar expression crossed his face. "I'm not wearing the purple condom," he said, handing it back.

"It's grape."
"What's wrong with blue?"
"It would make you look...frozen."
"Trust me, it isn't frozen."
She took out a cherry, of a particularly violent shade of red, and shook her head.
"What's wrong with that one?"
"Nothing, if you want to look infected."
He flopped back on the bed and stared imploringly at the ceiling. "Isn't there a nice pink one in there? The bubble gum flavor?"
She rooted around in the box, but couldn't find anything that could possibly be bubble gum flavored. "I've been stiffed. There's no bubble gum in here."
"Swear out a warrant tomorrow," he said in growing desperation. "Try the watermelon."
Sure enough, the watermelon condom was green. Daisy gave him an appalled look. "Gangrene."