The Mighty Storm (The Storm Series) 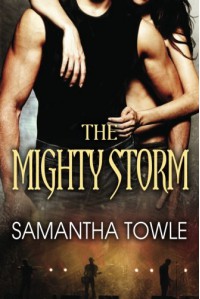 2.75 stars - rounding up because I liked more things about this story than I actually disliked.You are only allowed to read this review if one of these three things applies to you :1. You've read this book.2. You have no plans of reading this book, so spoilers will not be an issue for you.3. You plan on reading the book but don't mind a few spoilers because you want to read my awesome half-assed review (okay, so the narcissism was unnecessary, but you get my point).I'm not going to lie, I was a hair nervous to read this book.I know that a couple of my friends on GR were involved in some of the pre-release feedback for The Mighty Storm and I didn't want to piss off anyone if I hated the book because (surprise, surprise) I actually do like my friends. So I had a few complaints, but overall, it wasn't a bad read.I'm just going to go conversational on this review...no bullet points, no pics...just talking it out here. Let's address the first 2/3 of the story :The first 2/3 of the story felt like a better-written version of Thoughtless. The writing was more polished (other than a few typos) and there were far less repetitive character quirks and annoying habits. Because of this, I was probably less annoyed over the cheating than some people were. I'd seen it done in a far more excessive way in Thoughtless, so it didn't quite grate on me the same way here. I still wish that Tru had nipped things in the bud a few chapters sooner, however. I say this just about any time I read a story which features cheating as a main plot point - it's not the cheating that I have a problem with (we're all human and make mistakes), it's when the action continues on and on that I start to get antsy. Once or twice is not an issue for me. I'm fine with a little bit of drama thrown into a story...just don't drag it out past a point where we start to lose sympathy for the characters. I do think cheating as a main plot device is sort of tired by now. There are a thousand other ways to write conflict into a story without having to resort to this. Unless the author is going to bring it and expand upon the subject and make it something so major and creative that the idea blows everyone's minds, I'd rather see this trend be put to rest.Overall, I liked Jake and Tru's chemistry. I felt the connection and understood Tru's dilemma. In her situation, it was easy to see why she was torn. She had the love of a good man for 2 years, but the person she was closest to from her childhood came back. It was easy to see why she wrestled with her emotions. There were moments between the two of them that were magical :"Joder," I whisper.He grabs my hair, kissing me hard on the mouth.I really liked Jake. He was sexy, funny, cocky, interesting and thoughtful. His long-standing love and devotion toward Tru was adorable to watch. His issues and questionable acts of retaliation didn't really bother me because he had a lot on his plate and Tru didn't always make things easy for him (again, I've seen worse, so I tend to let things slide when some books take the behavior and amp it up way beyond this). The sex was nice and the love story was sweet. These are the things I actually didn't have a problem with.But yeah, there were a few moments that I could have lived without...Now I see that Jake is my mighty storm. He's fifty shades of fucked up broken and complex, and no one knows him like I do, or ever will. He needs me.*innocent whistle* You didn't see my revision there, right?Now let's address the last 1/3 of the story :Honestly, I felt like the story should have ended when Jake and Tru got together the first time.Tackling a drug issue during the last 100 pages of the book was just rushed and somewhat sloppy. In order to really give the proper amount of focus to this, there should have been more time allotted for the second part of the story. I would have preferred to have seen this book end at the part where you "thought" a HEA was going to happen, and the second part of the story broken off into another book. Otherwise, I would have preferred to have seen Jake and Tru get together much earlier on and had less focus on Will. Perhaps there shouldn't have been a love triangle after all. These two could have reconnected, then a focus might have been put on the problems that a fledgling couple thrown into the midst of fame and paparazzi stalking would have gone through. Either way, it felt like we had two separate books clashing with each other in one binding. Who should read this?Fans of high-drama books would probably enjoy this story. If you liked Thoughtless, then you'll probably find Mighty Storm to be a good fit. If you didn't like Thoughtless, but only because of the repetitiveness, then there's still a chance that you'll enjoy Mighty Storm. If you can't handle cheating in any form, then you'll want to skip this one.