The First Days: As the World Dies 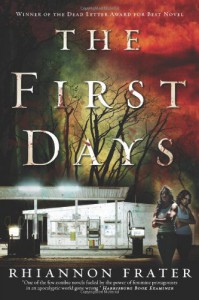 Back by request. It's time for another game of :THIS was round 1.Onward to round 2. *Edit* All spoiler tags are safe to click on. The tags are only here for the purpose of the game.Although, really, this could have been "dude" round 2. More than a few instances had me thinking the word again. How could you not, when there's blood and guts flying everywhere?And here we go...An abused housewife is forced to leave her house in a hurry when her jackhole husband and two children (one of whom was a toddler) become zombies and are trying to chew her face off.Should she get in the truck with an unknown woman who just pulled in up in her yard and get the heck out of dodge? You've made the right choice. Please continue reading.Should she try to run on foot? You fail at zombies. The rumors of them being slow are way off. Your journey has ended here.Along the way, these newly bonded "sisters" make a few stops, getting into trouble at every turn. They learn to become killers and are forced to put a bullet (or a car bumper) into any infected humans along the way. As a zombie horde attempts to block the women's escape to safety, they get on a CB radio and find possible shelter up ahead in a walled-off construction area.Should they try to run over as many zombies as they can and keep going until they can stop somewhere safe and analyze their next move? These zombies are badass. You're not getting around them. Your journey has ended here.Should they forge ahead and take their chances at trying to get up the walls into "safe zone?" It's the only option. After a harrowing near miss with a crane lift, the women (and their dog Jack, who was a tagalong) make it safely over the wall. You may continue reading.Life behind the wall is crazy but somewhat safe for now. Two interesting men rush to Jenni and Katie's aid. Confusion sets in as to which people might be interested in each other. Adding to the confusion is the fact that Katie seems to be finding herself bonding with a man, yet she just lost her wife to the zombie virus. Nobody knows what to do.Are you okay with seeing some potential romance come out of a post-apocalyptic and horror story? Good. Because this book has a little bit of everything. You're flexible. I like that. You may continue reading.Are you somewhat opposed to romance infecting your entertaining bloodbath? Eh, suck it up. There's still enough gore to keep the book entertaining for the romance challenged.Are you strongly opposed to romance infecting your entertaining bloodbath? It doesn't overwhelm the story at the start but there's a strong presence of love drama near the end. If you can't take it, bow out now. Your journey ends here.I won't tell you how it ends but can say this : If you are a fan of the t.v. show The Walking Dead, you gotta pick up this book. As I was reading, I felt like I was immersed in an episode of the show. Huge Bonus - there's NO Lori or Carl! Yes, there's a bit of back-and-forth love drama, but come on...some of us chicks like a bit of sappiness in between scenes of death and destruction.If you are a fan of the book [b:Angelfall|11500217|Angelfall (Penryn & the End of Days, #1)|Susan Ee|http://d202m5krfqbpi5.cloudfront.net/books/1319887835s/11500217.jpg|16435765] (...and if you haven't read it yet, what are you waiting for? This book lives up to the hype.) then you'll probably like The First Days. I think Angelfall was a little bit better and not quite as gory, but the reason I'm comparing the books is because both books seem to have a little bit of everything. Whether you like action, adventure, violence, being on the run, romance, etc. you'll have fun reading either book. First Days is more adult though, so expect the violence and sex to be turned up just a notch.Some people might have had hesitant feeling about all of the instantaneous and deep connections being formed between all of the characters in the book, but I think in a world swallowed by chaos, you're more likely to be forced into a situation where you have to rely on people quicker than usual. I liked how in this book, the survivors were willing to help each other. You often don't see that in post-apocalyptic books where people are forced to fend for themselves.The wheels of destiny had turned, and a new reality was being spun into existence.
Tweet