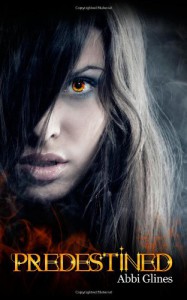 Much better than book 1. I'm going to tread lightly with this review. I need to write everything out quickly before some undetected annoyance triggers jump out from the shadows of my mind and manage to get me. As of right now, I don't recall coming across any in this book. Praise be! It's an early Christmas miracle! No sarcasm intended. I think I have less to complain about with this book than any other story I've encountered from this author. This was a nice little read.However, I'm still sticking with a solid 3 stars. The book was entertaining and didn't annoy me the way that Existence did but it still wasn't a "wow" read. Predestined was good enough for me to want to check out the next book, so hey, I'm fine with that.Okay, so the voodoo priest lingo was riotously funny in a massive cheese fest kind of way but I don't hang out with many voodoo high spirits either (unless you count one brief encounter with a troll in World of Warcraft). For all I know, Ms. Glines might be friends with the secret underground voodoo overlords of the caribbean and all of the dialect was 100% accurate. My very brief experience with fake spiritist tourist traps in the south means that I'm definitely no hoodoo voodoo (I'm now singing *you do!* out loud in true Labyrinth fashion) expert. What I can confirm though is that I now have an itching to go watch the movie The Skeleton Key over again because that movie creeped me the hell out in such a major way that I wasn't bothered by this book's version of voodoo at all.Honestly, other than my "all in good fun" joking around, I don't really have any complaints about the book. Oh wait...never mind. One small, itty-bitty complaint. I really wish that Dank was not a rock star and that the high school was not called Breeze. It reminds me too much of Sea Breeze book 1's character and setting. One thing I thought I would never do in a review is compare anything to the Fallen series (I'm so not a Fallen fangirl) but here goes : remember how in book 1 of Fallen, where you realized that Cam was far more interesting than Daniel (or at least most people did)? Well...sigh. I think this happened to me with book 2. I liked Dank in the first book. He sort of lost me in book 2. Leif all of a sudden SHOWED UP. I didn't even like Leif in book 1 iirc because he was a blowfish. Plus there was the entire fact that Dank was all sexy and rock star-ish and forbidden. Fast forward to book 2 and now Dank is just there...the still hot boyfriend who didn't really do much other than collect souls and follow Pagan around when she got in trouble. There's nothing wrong with that but then Leif came along and was like (I'm picturing a 70's suave voice in my head), "Hey you fine young thing. Look what I've done for you all of these years. I want to be a contender. I'm only being a douche because I have to - but if you let me in, I'll show you how I can rock your world." He even brought the looks and the voice and the shiver-inducing nearness factor (okay, so that was kind of a bad thing but go with me on this...). WTF LEIF?!? I wasn't supposed to like you. Bastard.
Tweet