Good For You (Between the Lines #3) 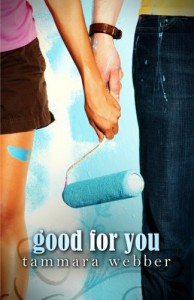 3.5 stars. I'm so happy that the second half of this book took a turn for the better because I almost wrote off Good For You as being a weak finish to an otherwise cute series. It's not that the first half of the book was bad or even slow. I had no problem sailing through the book and enjoyed the read. This author has a writing style that's easy to get into. My frustration came from feeling like I had lost Reid somewhere along the way. Maybe it was just the new setting. I was used to Reid's persona while immersed in the Hollywood lifestyle. Something about this whole new world made me feel like I had wandered into another series altogether. Is this really a fair complaint? Maybe Reid never would have found the right girl in among his peers, after all. No one would have wanted to read a book about Reid and another Emma clone. I completely understand that Reid needed to be yanked away from his bad influences in order to see life outside of his privileged bubble.Maybe I just didn't take to Dori right away. I shuddered every time a "golly, gosh, popsicles," or some other random word came out of her mouth. In contrast, Reid was as foul mouthed as ever, as if we were going to somehow miss the bright neon sign saying OPPOSITES. Again, not really a complaint, but I think Dori's language was a bit silly, almost as if it was pushed too hard that she was different from Reid. Just the fact that she was into missions and volunteer work was enough of an indicator.I had flashbacks of Adrian from VA/Bloodlines and his attitude that "these hands don't do manual labor," so that kind of made me smile. It was cute to see Reid come out of box a little and learn to act more like a normal person. His character growth was sort of a 1 step forward, 1 step back. Even though he cut way back on his vices, he did have a couple of slip-ups. I'm glad that he didn't completely change overnight. The book would have felt fake otherwise.The last 150 or so (ebook) pages of the book where was the book really came into its own and was able to compete with Graham and Emma's story. Watching Dori having to go through a personal struggle which was heartbreaking to her, and not really having the resolution she wanted was interesting to watch. I appreciated that she didn't have all of the answers and tried to cope with it in a way that was out of character. This made her seem more human to me. There was one revelation near the end that I did not see coming. Part of me thinks that the plot device might have been a bit off because it's a bit overused by this point, but I will say that I was definitely suprised in this case. When it was all over, I was happy with the way things turned out. Reid gets points for dealing with Brooke the way he did, but lost some for not telling Dori something he should have. I'm assuming that this will come later in their story - sort of an "off the pages" revelation that we don't get to see. He'd almost need to, with the way she'd managed to reveal some of her inner demons to him. It was a little surprising that Graham and Emma never made a cameo, other than one paparazzi mention of them. I definitely knew that their story was over, but a brief pass-by from them would have been fun.I'm going to miss this series. Part of me almost wishes that there would be a book 4, just because I don't want to leave these characters behind, but I didn't ever like Brooke and she was the only other character that got enough mention to possibly warrant a book. Maybe this is the right ending, after all.
Tweet