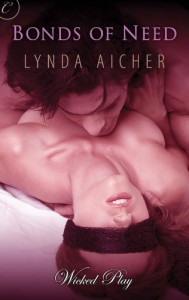 "A step at a time.""And if I fall?""I'll be there to pick you up," he said, meaning every word. "Or let you go. Whichever you need."Warning : menstrual talk incoming. 3.5 stars. Lynda Aicher writes the heck out of some sensitive doms. I still think there's some sort of "housewife fantasy" thing going on here because these guys almost seem too good to be true. Put these men in a commercial during daytime t.v. in which they're sweating and doing construction work while women embarrass themselves by drooling over them from their office windows while drinking a diet (brand removed) cola.I'm not sure in which universe you'd find three loving, caring, unattached, and smoking' hot men who decide to run a BDSM club together. Oh, and hey, they all just happen to be at a stage in their lives at the same time where they are ready and receptive to find their perfect mate. OH BUT WAIT, there's still more...of COURSE each of the 3 women that they're interested in just so happen to also be friends with each other! I'm waiting for the scene where these men all get their periods at the same time, because apparently, that's how they roll.The more I think about the absurdity of the situation, the more I'm giggling to myself about how ridiculous it is. Joking aside, I liked Bonds of Need. There were some definite improvements from the first installment. While book 1 had nothing wrong with it, I was not a fan of how the BDSM fantasy felt like it was catering to a bored housewife who was disenchanted with a husband who didn't bend over backwards to constantly please her in the bedroom. There wasn't much of the BDSM lifestyle showcased (especially given the club setting). Instead, it was all about a woman who was getting lots and lots of instant gratification and not really learning much about the D/s life (a.k.a. the man was pretty much there to be her orgasm bitch). Therefore, I am pleased to report that book 2 utilized the club setting much better than book 1 did. The main characters had a more compelling back-story as well, which made for a less boring read. At least this time around there were issues to deal with other than a woman whining because her ex-husband never touched her (a story I hope to never have to read again - that's why he's your ex, lady. Move the heck on).Deklan and Kendra had some great scenes together. I understood why Kendra was hesitant to trust Deklan. I couldn't fully understand why Deklan was so taken with Kendra, but everything started to make sense in time after we learned Deklan's history.Even though the base of the story stemmed from Kendra's past abuse from a previous Dom, there shouldn't be any big trigger issues. For the most part, the BDSM elements stayed strictly within the realm of flogging and the like. The style of play seems to be more relaxed in this series. The women are often giving an extreme amount of feedback (read : dictating the direction, which is a no-no in some books), and aren't using titles such as master/sir. I'm not sure if this was done out of the author's personal preference, or if this was for the point of making the books 'mainstream friendly.' Book 1 of the series was very much a BDSM-lite book (blink and you'll miss it), whereas book 2 read like a starter/intro to BDSM. Favorite part : A scene featuring some role-reversal. Without giving away the gist of what happened, this scene really spoke to me and had a great emotional pull. It was well-written and moving.Least favorite part : The downplay of a dangerous situation. When a person does something that is dangerous, it should not be shrugged off as not needing to be reported to the police. For as protective as Deklan was, I was surprised to see him not push Kendra to handle some of her issues differently.For readability's sake : This will do. There was some sweet, some steam, and some emotion. All in all, it wasn't a bad night spent reading."How can you trust again so freely?" He laced his fingers in her hair, his lips pressed back to her temple. "Because it's you. Only because it's you."This book provided from the publisher through Netgalley in exchange for an honest review. All quotes are from the pre-published copy and may be changed or omitted in the final copy.
Tweet