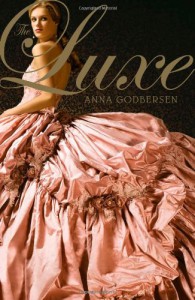 I can't believe that I'm about to rate a book based on the characters over the story itself.The Luxe as a read felt like historical fiction meets Gossip Girls. The historical part was great - the Gossip Girls part - not as much.However, I really warmed up to flow of the story as it moved along past my initial first reaction. Sure, this book is about high society in the late 19th century. It's absolutely girly and gossipy and filled with mock scandal. Unashamedly, I found myself starting to love the book about midway through, to my complete surprise.Each chapter rotated viewpoints between one of several girls featured in The Luxe. Every sub-story branched off from the main character Elizabeth's larger story. I found myself bored with Elizabeth, and almost put off by her. What really redeemed this book for me were the adventures of her younger sister Diana and her (((***mini-spoiler ahead***))) forbidden love with Elizabeth's bethrothed. I loved how much of a little rebel Diana was, and that she was able to retain much of her real-ness, which in turn caught the eye of her older sis' fiancee. I can't wait to see more of Diana in future books.I give the first half of The Luxe a 2 star rating because it took me a few chapters to warm up to the author's writing style. Thankfully, Diana and Henry made the book for me.
Tweet