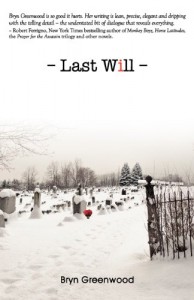 2.5 stars. This is the second time in less than 24 hours where I'm going to have to use the terms quiet and anti-climactic in a review. There's no doubt that I should consider digging deep into my mental thesaurus to come up with different terms but I'm going to reserve the effort for a book I'd rather gush about.Even though this was a much easier read than Lies of Locke Lamora, I don't think I can award bonus points for being able to get through the book quickly. The style of writing was not too complex, yet it lacked depth of emotion. If anything, the mood was somber in a way which felt heavy instead of contemplative. It was as if I wanted to hurry through the book just so I could get the monkey off my back.Last Will started out almost memoir-like in spirit, if you want to liken this to a memoir from people who you don't really know anything about, which leaves you wondering why you picked up the memoir in the first place. As the dual PoV's started to refine themselves, the narrative turned into an internal monologue of observations. The writing style was very matter-of-fact. Imagine a ping pong match where the moves only alter slightly with each stroke of the paddle. Some observations were dry and amusing.That practicality aside, however, breasts are an attractant, examples of the incredible marketing genius of biology. Imagine a toothbrush so alluring it made you want to brush your teeth. You couldn't stop thinking about brushing your teeth. It ate up whole hours of idle thought. That would be quite a toothbrush."Two skinny people in bed are dangerous and sad, like lawn chairs having sex."Some observations were beautifully written.There were a couple of scenes I would have loved to include in this review had they not been so long. I can't believe I was moved by a passage of Bernie waxing poetic about Meda's stretch-marked breasts. This author should think about switching to another type of storytelling, something that would showcase the power of words.Meda's fingertips traveled to the scar on her mouth. She didn't say a word. She didn't say, it's the man who cut up my face, who scarred me. She didn't say, it's the man who raped me. She didn't even say his name. It was an omission that spoke volumes to me.(she was) terrifying, but in the lovely, rollicking way that a snake is terrifying. Fast, poisonous, slithering in the grass, but brilliantly designed. All sharp fangs, plated scales, and sinuous coiled muscle. Even if you're afraid of snakes, once you see their practical beauty, all the things you think you know fall away.This was a story about two broken people finding their path to...Recovery? Redemption? A place that worked for them? Honestly, I couldn't tell you. By the time these two figured out what they were doing, I didn't care anymore. Yes, there were bigger issues at work here. Both of these characters had seriously messed up pasts, but their continued emotional detachment from the past really screwed with my head. It killed me that Bernie's lovemaking was described as quiet and uninteresting. Uh...yay for the man who has performance anxiety?One could argue that the story was moving, the journey was touching, and the ending was what it should be. To be honest, I was hoping the term "last will" was going to make for a nice twist on the ending but it didn't. I can't say that the book was bad because it wasn't. I'm guessing that in a few months there will be several glowing reviews from people who understood and embraced what this author was trying to do. I won't even be able to disagree with them in that aspect because there is definitely a niche for Last Will. There are readers who will appreciate the complexity of this book much more than I did. The writing style was a distant reminder of Me Before You, except I felt like MBY was executed in a way which kept me wanting to know what was happening to the couple on their journey (and it moved me enough to cry).So take what I've written with a grain of salt. Check out some other reviews. This might be more your thing than it was mine.
Tweet