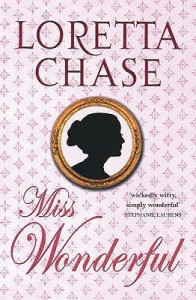 I blame my lack of interest on not being in the mood...or something like that. From what I hear, this author writes wonderful Historical Romance and since I like HR, chances are I will enjoy reading this author at another time. For whatever reason, this book didn't work for me.There was no humor, no fun banter, and no blazing sexual chemistry. If anything, I felt like I was reading an extremely formal book where nothing really happened other than people explaining their previous and current predicaments. When the "coupling" eventually took place it was very toned down, which was sort of disappointing.The hero was one note. The heroine was drab...and I'm only saying this because the hero himself didn't seem to appreciate much about the heroine until later in the book. He focused so much of the first half of the book on her terrible choice in clothing. Apparently, he was that century's version of a stylist instead of the veteran he was made out to be. Well alrighty then. I marked a few quotes from the book but really, what's the point of putting in pretty quotes unless you're recommending the read? Consider this my lazy review of the week. I'm allowed at least one (or two) of these!Apparently, this author is a brilliant writer though, so I will try again at another time with one of her highly recommended books.
Tweet