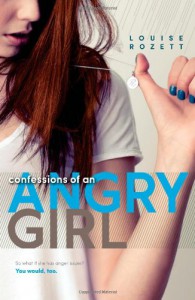 Welcome to high school, Rose Zarelli. It's survival of the coolest here. And you, with your running shoes and your French horn and your fear of sex and your missing hymen and your weird attacks and your dead father, you are definitely not part of the posse.Well, fine. So be it.Fuck cool.3.5 stars. Take one part Chloe Saunders from The Summoning and one part Ruby Oliver from The Boyfriend List: 15 Guys, 11 Shrink Appointments, 4 Ceramic Frogs and Me, Ruby Oliver (dang, that title is about as long as Bloody Jack book 1) and you'll come pretty close to understanding Rose Zarelli. Which means you'll be figuring her out long before she figures herself out. The chapter heading and quote from above is something that comes much later in the book.First impressions :I love the chapter headings (as shown at the start of my review). Cute book, albeit extremely young in tone. Yes, there were colorful words, as well as mentions of sex and drinking, but there's always something about girls trying to figure themselves out which has me reminiscing on the very early side of high school. Which, to be fair, is right where Rose has landed. I know that a lot of "enlightenment" takes place between the years of 14 and 18. I'm probably so used to reading on the older side of YA fiction that it always makes me do this little head shake (yes, I actually DO the shake) when I read about girls who don't know stuff that seems obvious to the rest of us.As the story continued :I found myself somewhat frustrated with Rose's hatred of all things popular. Instead of figuring out how not to be a "have not," she griped about the "haves." Although, I do think that some of this outlook did go hand-in-hand with her not fully understanding what she wanted to do with her current situation. I was personally glad to see her start to learn to stand up for herself as the story progressed.Where I landed :Overall, I ended up liking this more than I expected to. I found characters to like (Angelo and the brother), a character to be curious about (Jamie), and a few characters who I'll probably love to hate. This isn't my normal fare, but I'm glad I took a chance. I'll be looking forward to book 2.This book was provided from the publisher through Netgalley in exchange for an honest review.
Tweet