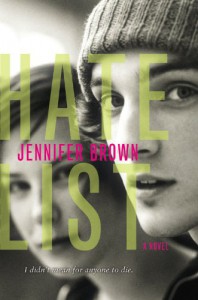 3.5 stars. After sitting on my thoughts for a day, I feel like I can't review this book with any sort of polished thought process, so I'm just going to let my fingers type out whatever comes to mind. I think this book probably deserves a 4 star plus rating because it is a story worth telling and a story worth reading, but a few things held me back from going higher.1. The timing was off for me. Given that my state has been rocked by several shootings over the past several years (the most recent being the movie theater one; the most upsetting for me personally being the one that happened in my town not long ago at a church we've participated in activities at), I think my mind was having a hard time processing the fact that I was reading this book as fiction, for the sake of entertainment. I might have been better off picking up a real account, such as Columbine instead. I'm not saying that Hate List trivialized the severity of the subject for the purpose of cheap thrills. I've used the word "entertainment" very lightly in this regard. The subject matter was absolutely handled with the utmost of respect.2. Books like this should be required reading for kids around the middle school age range. Kids need to be told over and over just how bad bullying is. This book managed to show many perspectives on a school shooting, but the one perspective that stood out to me the most was how one person felt like if they'd been a little kinder, there might have been a chance that the entire chain reaction of events might not have been triggered. ONE person out of the many bullies tormenting the offender might have been able to prevent something so horrendous from happening.3. Most of the book felt cold to me. I can't explain why I felt detached, but I was. It wasn't until the very last section that everything hit me in a big way (it appears that a few other friends thought the same thing), and then I started to cry. The book was worth reading just for the way I felt about the last section, but there was something about the setup which felt sterile to me. Maybe that was the point, who knows...but some of the past and present transitions could have been handled a little smoother. 4. I appreciated that both of the parties (directly and indirectly) involved with the shootings were shown as feeling, thinking, human beings. Too often, we fail to look at the person committing the crime and wonder how they got to such a place that would make them want to hurt other people. This passage near the end of the book made me lose it (I'm not going to consider it a spoiler that you'll figure out the shooter killed himself because that happens a good portion of the time with these types of crimes, so it's something the majority of us would probably assume to be something that would happen) :Of course Ma would have wanted Nick remembered as a "Beloved Son." Of course she'd do it in the most laid-back way possible - whispering it to him in tiny letters on his headstone. Just a whisper. You were beloved, son. You were my beloved. Even after all of this, I still remember the beloved you. I can't forget.Even the worst person on earth might still have someone there, remembering them after they are gone - remembering not only the bad, but also the good, the part of that person worth loving.Just typing that out had me fighting back tears. Maybe if Nick had realized just how loved he was, he wouldn't have felt the need to kill those on the "hate list," those people who bullied him. I guess we'll never know.
Tweet