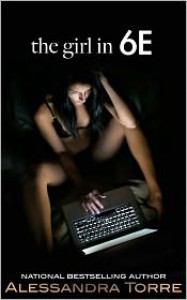 One thing changed my mind. One darn thing. When I first finished The Girl in 6E, I honestly thought I was going to rate higher than where I ended up. At first, I was thinking something between 3 and 4 stars because I'd been entertained. But I sat on my thoughts for a moment and waited to review, which lead me to realize that my initial feelings about the entertainment value of the story were not balancing out my feelings about some of the unresolved character issues at the end of the book.My initial assessment that this book would be dark erotica was incorrect. While The Girl in 6E was dark, it certainly wasn't a turn on. There were erotic details because of Jessica's profession, but if you're wanting to read a book for the sake of steamy and captivating sex, this won't be the book for you.Jessica/Deanna is fighting off urges to kill. She keeps herself locked in her apartment so she doesn't harm anyone. She supports herself by being a webcam girl, who acts out fetishes and fantasies for money.Different concept, right? I thought so. It was all kind of bizarrely fascinating to watch "Jessica" at work. Every client had a new kink. Every package delivered to her home was left for her to retrieve when no one was around. The girl had issues. I have a twisted interest in people with issues.Very mild spoilers ahead about character behavior, but I'll avoid any big plot reveals.The webcam side of the story was executed well. It was obvious to see that the author had put a lot of research into knowing how girls on camera go about making their living.The 'crazed killer' side of the story was awkward and not fleshed out as well on that front. Some of Deanna's behaviors didn't match up from one moment to the next. Is she well, or is she unwell? Her thoughts and habits lead me to believe unwell in every sense of the word. Just because Deanna might have changed her behavior and chosen to do something good for another person, this does not mean that it would flip her switch and make her a "safe" human being again. Jessica's transformation back to the Deanna side was unrealistic in every way, and handled irresponsibly. Given all that we'd seen of Jessica/Deanna, there's no good reason why she should be out walking around in society again without any supervision.Basically, there wasn't enough information given at the end to show us which direction this woman was headed in next, other than insinuating that she'd figure it out in some way. And I didn't like that, given where she'd come from. If this person was real, I'd still consider her a loose cannon who needed a lot of help - something that she couldn't get from having a boyfriend and an internet shrink alone.
Tweet