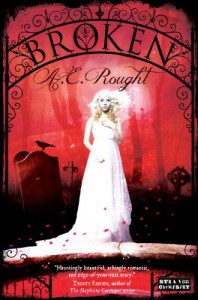 From the summary : Imagine a modern spin on Mary Shelley’s Frankenstein where a young couple’s undying love and the grief of a father pushed beyond sanity could spell the destruction of them all.2.5 stars. Yet another case of "great concept, poor execution." Don't get me wrong...I can appreciate a love story as much as the next romantic, but when a story is being marketed as a spin on Frankenstein, I expect to see more to that side of the tale. Throwing in names like Shelley and Franks every few pages isn't enough to bring the concept to life.What makes this story even stranger is that there was no real break between one life-changing incident and the introduction of a person who was too closely tied to it all. The main character Emma was so confused in her own head, that I felt uncomfortable watching her pick and choose her emotions because she wasn't sure which feelings were even appropriate for her to feel. I can't say this enough : it's not hard to write in a chapter header which says two years later, or something to that effect.Where the story did finally manage to break out into interesting territory was in the last 50 or so pages. I almost wonder if this story could have been more interesting had it been told in reverse, or if more of the facts had been given upfront. The supposed 'air of mystery' wasn't really a mystery, since the reader knows what's coming before they even pick up the book. So instead of wondering what's going to happen, the observer is required to sit through pages and pages of everyday angst. A book centered on Frankenstein should have less attention given to basic day-to-day activities and silly drama. Some of the details did manage to tie in with the rest of the story, but by the time we got to that point, I felt like I'd been lulled into a place of not caring.Granted, there is going to be an audience for the book. Even though Broken is being marketed as regular YA (probably because of some violence), I'm thinking the middle grade/tween crowd is going to better love this one. As well, I think fans of the 2005-2010 (ish) style of emotion-driven YAPNR will probably be less harsh on the slow build to action. If your favorite books in the genre are the old-school style ones in which the romance carried the majority of the plot, you'll probably be a bigger fan of this book than I was. Like I said, I'm all for romance, but when you're bringing out the Frankenstein angle as a draw, there needs to be more on the story/background side (for my tastes) than what we got with this book. A better balance would have pushed this book from okay to something special.
Tweet