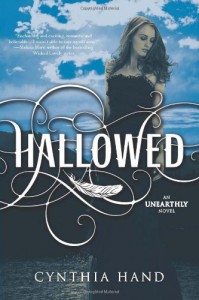 For as much stalling and half-assing I took while reading the first half of Hallowed a couple of months ago, I breezed right through the second half when I came back to it just now. Realizing that the book was about to be released was the kick in the butt to finally get back to my galley and finish this up. My mood must have been off the first time I tried because I thoroughly enjoyed the second half of the book. If you haven't started this series yet and you're looking for a YAPNR that's less ridiculous and eye-rolling to read than some of its other angel competitors, you might want to give this series a shot. I will say though that Unearthly and Hallowed are definitely more on the PNR side (rather than UF), so if you're looking for a more action-filled adventure, you might want to look elsewhere (Angelfall would be my recommendation if you want something a bit darker with more suspense). The Unearthly series is the smarter version of the romance side of the genre.Book 2 was a great addition to the series. This was no bridge book, and there even new twists and surprises to be had.I have a couple of theories about who will end up being evil, but I'm choosing not to go there just yet. Time will tell.I'll leave you with this little gem :He turns to look at me, scratches at the back of his neck."This isn't going to become one of those creepy situations where you show up at all hours of the night to watch me sleep, is it?" he asks playfully."Every moment I'm away from you, I die a little," I say in return."So that's a yes, then."
Tweet