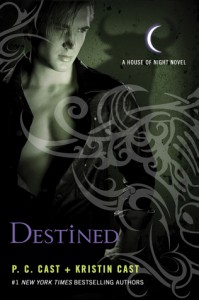 2.5 stars. While the series still isn't going to make it onto my "recommended reading" list anytime soon, I will begrudgingly admit that for all of its flaws, the books are taking a much-needed and long-awaited turn for the better.There are still a few mentions of brown pop, IBS, shopping, and other annoying phrases which I still stumble over and roll my eyes whenever they pop up, but it's been toned down immensely - thank goodness.While poor language skills, stereotypes aplenty, and a lack of strong characters is a huge downfall of this series, I will give credit to this installment of the HoN series for bringing out the one major strength of the Casts - the ability to tell a fun, thrill-ride of a story. Rephaim, Kalona, and Aurox all had great stories starting to unfold. I agree with a friend who was a bit displeased by the dumbing down of Erik (was he EVER dumb before? Conceited, yes - dumb, no. He is a flipping PROFESSOR, after all), but I like that his character is finally starting to come back into the story after being relegated to being the asshole who was pushed aside. We still don't know if he'll end up on the side of good or evil, and I'm going to enjoy finding out. There's a new character in this story and I'm not sure what to think of her so far. She hasn't interested me yet, we'll just leave it at that.I'm not sure if I'm liking how fast Kalona seems to be changing, but I do like the direction this is headed in. Hopefully he will find his way back to Nyx someday.Even though I still wouldn't recommend the series to people who haven't started it (there are far better series in this genre), I would encourage those who are at least partway into the series to keep going. It does get better a little bit at a time.
Tweet