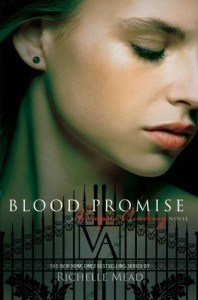 The time has come. It doesn't matter that I read this book forever and a day ago. Blood Promise deserves a review - one that I wrongfully neglected to give at the time of finishing. The 5 star rating at the top says nothing about why I loved this book back then, nor does it say why I still think about this story even now. I doubt I'll ever go back and write reviews for the rest of the series but this book...it's in my soul. Don't expect one of my normal polished reviews. I just wanted to finally put some random thoughts down about one of my all time favorite books.So why was a middle-of-the-series book my favorite? Two words : Primal Dimitri. I can't honestly say more outside of spoiler tags. If you haven't read up through at least book 3, you absolutely don't want to look or you'll have the biggest plot surprise spoiled, and this is one thing you really don't want to have spoiled. Someone spoiled it for me and I missed out on getting to experience the crazy shock of book 3's ending. Okay, so I know...big bad evil Dimitri is "technically" not romantic, not cute, not sane. Run away from the scary killer man, blah, blah, blah. But go with me on this : I loved Dimitri's character pre-transformation. He was honorable, loyal, strong, brave, etc. etc. etc. But he was tormented by his good character. He STRUGGLED with wanting Rose. He WANTED to do the right thing and fought his desires as much as he could. It was part of what made him such an admiral person. I felt like he was able to look past Rose's age because she was more of a peer to him than a student. Anyway, I'm not going to debate whether or not he should have even gone there because I know some people disapproved (with good reason). So when he was turned and he lost part of himself, it was intriguing to watch his honor get kicked to the side in favor of satisfying raw need. He didn't fully understand why he wanted Rose, he just knew that she was what he wanted...and he went for it. In any other book, I would have been flying the "abuse is wrong" flag...but in this book, I relished the thought of watching such a carefully crafted Guardian throw it all away and take what he wanted. His complete character change worked because it was such a contrast to who he really was as a person. It felt like some of his subconscious desires that had been there all along were made manifest in his new Strigoi persona.Anyway, I've been thinking about this book more and more because of the upcoming Rose & Dimitri in Russia story that will be released shortly. I can't wait for this because I felt like it was the one part of book 4 which we didn't get to see closure on. Dear Dimka,If it doesn't work out with Rose, you have my number. Call me. Love,A person who will still be thinking about you after everyone else has moved on to the next flavor of the week. Are you a fan of Richelle Mead? Come join the chat as we get ready for the release of the first VA movie : Blood Sisters! Richelle Mead Fan Group
Tweet