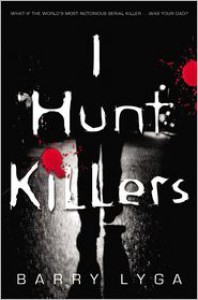 HEY. YOU WEREN'T SUPPOSED TO CROSS THE TAPE. THIS IS A CRIME SCENE INVESTIGATION.Oh who are we kidding...no one ever pays attention to warnings, especially book characters.Our lead character Jasper (Jazz) is no exception. Except in his case, he is smarter than the average bear cop. After all, you might know a thing or two when your dad is one of the most famous serial killers of all time. His skills are bound to come in handy when hunting down a serial killer who is copying his dad's moves.Welcome to...Three fingers on the right hand were missing - the index finger, the middle finger, and the ring finger. The thumb and pinky were all that remained; that hand would flash devil horns while the corpse rotted in the ground somewhere.Apparently, being smart enough to catch a killer does not include knowing the difference between the "devil horn" sign and the "hang loose" sign. Ah well, I'll let that slide. Jazz is still pretty useful. So what if his brain's a little fried? Mine would be too if I had to watch my dad mutilate people and animals when I was a small child, and because of this I now couldn't get my father's voice out of my head.Struggling is what makes it worth doing, Billy said. Jazz closed his eyes, trying to chase away his father's voice, but it was no good.This is not an easy read. The details of the murders are startling and graphic. It's a pretty dark story. I was, however, completely bowled over by this peek into a life so far out of the realm of ordinary. The poor kid...everyone around him seemed to be pulling him back and forth. His father and grandmother believed him to be a monster, while his best friend and girlfriend were doing everything in their power to counteract that belief.Even Jazz himself didn't truly know who he was. Was his father right? Was his destiny not in helping to catch the killers, but instead to become one himself?It's not that I want to or don't want to. It's just...I can. I imagine it's like being a great runner. If you knew you could run really fast, wouldn't you? If you were stuck walking somewhere, wouldn't you want to let loose and run like hell? That's how I feel.I'm so happy that this book is going to become a series. It's going to be quite the experience to watch as Jazz figures out his own head. I like that he's conflicted. Not everything is black and white in his world.The multiple viewpoints were especially interesting. Getting the chance to be inside of the killer's head added a bit of extra creepiness to the story. Bonus points go for fitting in a Silence of the Lambs reference. The last few chapters definitely had a SotL vibe. I was digging on it."Have the lambs stopped screaming, Clarice?" Howie said suddenly in a dead-on Hannibal Lecter impression.Book 2 is going to be CRAAAAAAZY. I can feel it.
Tweet