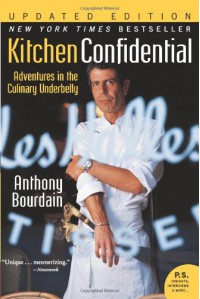 I almost feel the need to have to bring back my "3 stars is not a bad rating" disclaimer, since I've had a bizarrely rare couple of weeks with several 4 star rated books in my lineup. Well here we are again, settling back into the "3 star is the standard" normalcy of my world.Kitchen Confidential was an entertaining read. The main reason why I couldn't swing a 4 is only because I think I'd expected there to be more "trade secrets" about the restaurant industry than there really were. I'd half expected to be terrorized into never wanting to eat in a restaurant ever again after finding out that 95% of restaurant employees either pee, spit, or masturbate into their food (I'm only half joking). I'd honestly thought that I was going to be reading the book like this :Now, that's not to say that there weren't a few disgusting tidbits thrown out for me to contemplate. For example, I now know never to order fish specials on a Monday, or to eat Mussels just about anywhere. But...I think I wanted to know more about the "behind the scenes" dirt on what can really go wrong in restaurants than what we were given. Something else that I'd expected to see more of was Anthony's hard-on for hating on the Food Network community. There were a couple of little digs in this book (the "you're halfway to making that fuzzy little Emeril your bitch" comment made me snort), but nothing even remotely at the level to which I would have expected (maybe that was a publisher reign-in, who knows?) I've followed some of his past interviews and blog posts and have to admit to being far more amused than I should be over his petty jabs at Rachael Ray, Emeril and others. Note : I have nothing against these people and have spent many hours watching the Food Network over the years. I guess I wanted more of the "gritty" dirt that I thought AB could provide, so I found myself slightly disappointed. But again, the book itself was entertaining for a memoir of his experiences coming up in the foodie world. This isn't to say that I wasn't amused over the fact that he walked around in his youth wearing nunchakus in a holster while carrying a samurai sword (and we're not talking the pre-teen years, we're talking college here), but I have to admit that I'm more fascinated by the sarcastic 50-plus-year-old man who has digestive issues, drinks like a fish, and got filmed eating an animal's poop chute on his television show. We did get to see some of his irreverence in the book. This is not a politically correct read all of the time (and I don't agree with many of his opinions), but at least he's an equal-opportunity shit talker. He might be brash and crass, but he's definitely got a distinct point-of-view.Your body is not a temple, it's an amusement park. Enjoy the ride. Sure, it's a 'play you pay' sort of an adventure, but you know that already, every time you ever ordered a taco or a dirty-water hot dog.
Tweet