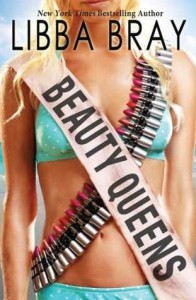 "Pirate rock stars? Please, that's like the heroin of television."Beauty Queens : Proving that it is possible to have too much of a good thing.2.5 stars. I would actually watch a show with pirate rock stars.So this is satire. Before you read this book, it is important to know that it is not meant to be taken seriously. If you find yourself hating certain characters, they were probably written that way for a reason. I generally like satire, parodies, or anything using some form of ironic wit to make a greater point - in small doses. I think it's very hard to carry an entire book of over-exaggerated humor without people getting tired of it after a certain point. For me, the exhaustion hit somewhere around the 30% mark. Bray's observances about the flaws within the beauty industry in general were spot-on and I appreciated that. However, I still felt like the ideas were getting stale after a while.On the positive side, Bray's wit was hilarious. I admit to grinning at a lot of the dialogue. On the negative side, by adding in the commercial breaks and extra commentary from the corporation (and t.v. show angle), it took a fun concept and stretched it out far past an acceptable length for the story. I kept thinking that if the book had been focused only a plane crash and the contestants of the pageant, that it could have been so much better. I wonder how much more I would have enjoyed this if the point of view had been scaled back to one main focus instead of jumping around all over the place. If things had been different, I could easily see giving this book 4 stars. But for what this was, I feel the need to state that the complaints were more about what I do and don't like and not a reflection on if the book was a success or not. I already knew before this that Bray could write her ass off and she continued to prove that here with Beauty Queens. I can't fault the author for choosing the format that she chose for this story, but it's not a format that I preferred to read here. It's just a personal preference.You've never read satire? Well, here's a sample."My head kinda hurts," Miss New Mexico said. Several of the girls gasped. Half of an airline serving tray was lodged in her forehead, forming a small blue canopy over her eyes."What is it?" Miss New Mexico checked to make sure her bra straps weren't showing.Some girls argued over whether the death of Miss Massachusetts - favored by the bookies to win the whole thing - meant that the competition would never feel entirely fair.They were going to replace it with that show about Amish girls who share a house with strippers, Girls Gone Rumpsringa?"My mom let me use that song for my Christian pole dancing routine.""I want to pursue a career in the exciting world of weight-management broadcast journalism. And help kids not have cancer and stuff."
Tweet