Reflected in You (Crossfire Trilogy Series #2) 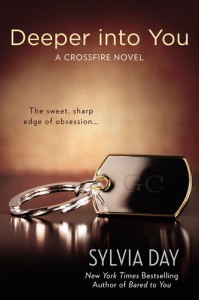 This won't be a greatest hits review.2.5 stars. I apologize in advance. I actually spent an hour typing out a review, hit post, then decided to scrap the entire thing and start over because I didn't want to subject you all to my extreme ranty side that comes when I am so wrapped up in the negative that I fail to see the positive. The sarcasm was out in full force tonight. There were to be no fun headers or witty scripts. It was just a rant-o-rama with a side of 'fetch me my gun.'Take TWO! Let me start with the positives first this time, so those of you who want to exit the show before it goes south can make haste and leave while the getting is still good.*pause for a moment of reflection and a sip of liquid refreshment* There. I'm feeling better already. Positive Number 1 : Gideon is still sexy as all get-out. In case you forgot, your memory will be refreshed until your mind has been beaten into submission and you are able to recite details about his person for memory. This one is actually sort of a plus-minus for me. I like being refreshed as long as we're not consumed with repetitiveness.Positive Number 2 : Gideon can kick ass. And when he's not personally kicking ass, he has the money to hire someone to kick ass for him. Because sometimes, it's just not worth it to get that suit dirty.Positive Number 3 : Gideon can talk the talk and walk the walk. Dirty talk coupled with dirty sex is always rewarding.Positive Number 4 : I thoroughly enjoyed the middle section of this book. The restaurant scene and the concert scene (which was quite yummy) were top-notch. ...and end positives. If you want a story with a sexy, protective, alpha-male who can satisfy his woman to mu-mu-mu-mulllltiples, there you go. Get on this asap. I have to stick around and finish this review.Negative Number 1 : The first half of the book probably contained more romance cliches than any romance book I've read in a while. My all time non-favorite showed up in this status update. I was also not-vibing over Gideon using the word "milked" in reference to what a girl part does to a boy part. That is romance lingo 101 - not actually something a MAN would ever say.Negative Number 2 : The story was all over the place. There was more running away and then return makeup-fucking than needed for one book. Compare this book to putting every single kidnap scene from the Kristen Ashley Dream Man series in one book (oh snap...I did go there, guess the snark didn't fully go away). That's how much running and re-coupling happened. Negative Number 3 : Gideon was a controlling jackass. Alpha is fine. Protective is fine. Controlling is not fine. I didn't think Eva's counter-reacting was enough of a get-out-of-jail-free card for his behavior. Eva did give it back to him, but she should have stressed harder boundaries if he wasn't fully ready to heal/change just yet...it is possible to love someone through their flaws as they're learning to change, while still maintaining self-dignity. Her little games with Gideon to prove that she knew what he was up to were just that - games. Negative Number 4 : The story could have been stronger overall. HOT MAN plus HOT SEX does not equal greatness in storytelling. It equals "hell yeah, that was an enjoyable chapter 3, 7, 14, and 29" (I don't actually recall which chapters had the hot sex, but you get my point). I hated that we didn't really get to start learning more about why our characters needed therapy and healing until the end of the book. I could have used a few more breadcrumbs of substance to balance out all of the extreme obsessing and jealousy issues. Just a few!...and phew. I managed to point out my negatives without turning this review into a hate-filled rant. Overall, the book was alright with a few glaring issues. I do find myself more invested than I was with book 1 (which felt like a better-written version of Fifty and left me underwhelmed), so I'll probably give book 3 a shot.So, I managed to snag a small portion of my commentary from the original review. I couldn't bear to send it all to the void. Here you go :I'm a little alarmed over the "new" romance standard that's crept in over the past year or so. Oh, who are we kidding? This hasn't been a creep...this has been a steamroll.The first few "extreme drama" books that I read were fun before it got old, fast. I'm ready for this high/low style of writing to die out soon. When the trend started, the style was new and different - it quickly became the kind of story which made us raise an eyebrow and excitedly start comparing notes with our friends about what the hell was going on. Now it's just turned into a free-for-all of storytelling which has become prone to an over-saturation of carnal obsession and unwise decisions. What happened to smart characters and engaging stories? How are we falling for this recurring story of ultimate dominance wrapped up in a smooth-talking, panty-dropping package? Do the 'golden' attributes of wealth and sex appeal give a person license to be a total controlling jackass? Are trust, honesty and good character no longer valued qualities for the contemporary woman?You can chew on that and spit it out if you want. My opinion does not reflect the general population. Most people love these books. What can I say? I did rate this one higher than the first, so something must be growing on me. This book was provided from the publisher through Netgalley in exchange for an honest review.
Tweet