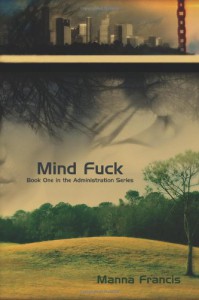 "I fuck minds," Toreth said pleasantly.Hrrrmmm...mixed feelings. I think I set my expectations too high and didn't quite get there. For reasons completely unknown, I thought I was going to be reading a harder-edged sci-fi. Don't ask me why. I almost figured that I was going to be getting the sci-fi version of Psy-Cop. Maybe it's because of the simulation part of the story, which I thought would be more of a focus. Truth be told, I would have preferred more of a sci-fi bent. My favorite parts of this mind-fuckery were scenes which took place in the sim, along with some of the Warrick/Torreth interactions. I'm not one to enjoy reading about corporate posturing and mysteries plopped down in the middle of another story. So much of the random chatter was skim-worthy. Business sabotage - eh. Investigations - yawn. I wanted more of the power struggle between the two male leads and more sim time.Okay, so I wouldn't quite go that far. It wasn't all boring. There were exciting parts here and there. I did finish, after all.This is the type of stuff that makes me want to read :He could still be inside (the sim) and he would have no way of knowing.So, okay, the sim did tie into the whole investigation going on, but I still felt like so much of the conversations were drawn out.The steam was so-so. I think the point was more about observing the power play, instead of getting our rocks off, and that's fine. As mentioned before, I liked the scenes with the male leads. Will I read book 2? Maybe at some point. We'll see. I can't tell if this was a case of there being more groundwork in book 1 or not. I'd have to know if things pick up from here on before deciding whether or not to continue. There were some good ideas here, so I am curious to know how it all plays out.Just a game. A game for which there was so much scope in the sim, where it would leave no bruises.
Tweet