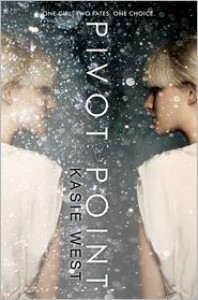 Two Paths - One Choice.3.5 stars (but the ending was 5 stars, so hurry up book 2!).Poor Addie. I have a hard time trying to figure out which restaurant to go to or which movie to watch when given a choice. If you told me to pick between two paths which would lead my life in complete opposite directions, yet both paths might come with their own set of problems...forget it. I would probably end up having a nervous breakdown.3 second basic story concept : Addie's parents are getting a divorce. Addie has powers which allow her to look into her future. Addie decides to investigate two different futures - one with her mom and one with her dad.The first 30% of the book had me sort of frustrated. I knew that I was being set up for what was to come but it's slightly annoying to switch back and forth with the story pov's. Something about the flow reminded me of how I felt while reading Will Grayson, Will Grayson. I distinctly remember enjoying one of the Will povs, but the other not as much. Instead of 2 different Wills, we had 2 of the same Addie in a different setting. One side of the Addie story I really liked. The other side floundered. The chapter headings were a fun little touch to distinguish between 2 different stories which took place in the PARA (special powers) community and the NORM (normal) community.The PARA side : the 'not as interesting' half of the storyEveryone has special powers in this closeted community. Addie's starting something with the local football hero. You would think that the side of the story in which everyone uses special powers would be the best part, but eh. I guess when everyone can do something and it becomes part of everyday life, this turns out to be just as normal as any other story.The NORM side : wins the battle of the dueling worldsNot surprisingly, I have to go with the lovable artistic guy as a love interest. This side of the story was more interesting because this life was new and different to Addie. For her, learning to use appliances and unlock doors the way everyone else has to IS abnormal. My overall thoughts :I spent almost two weeks sitting on this book after reading the first 30%. There was nothing that jumped out and grabbed me about what was going on because everything seemed to be focused on everyday life and the two boys who Addie might have to pick between (which was sort of lackluster imo when you could be focusing more on crazy powers), so I decided to come back when I was ready. But when I did come back, I found myself flying through the rest of the book in less than a couple of hours. Once I started to really focus on the stories as the paths started inching closer to the collision of time when it was 'one or the other,' I realized that Addie was going to get hosed, no matter which path she took. Which immediately made the story that much more interesting, once I realized that it would eventually come to down to more than just which boy should I choose?The last part of the book surprised me. I had some suspicions about which path she was going to choose, but didn't realize that so much would need to be altered in order for this to happen. There is a HUGE speed bump which is now going to mess with everything that happens from here on out. I think there's real opportunity for book 2 to have some crazy stuff happen. My hope is that there will be a bigger presence of special abilities and powers. We got pretty far into this book before we started to see the ramifications of messing with potential outcomes.This book provided from the publisher through Edelweiss in exchange for an honest review.
Tweet