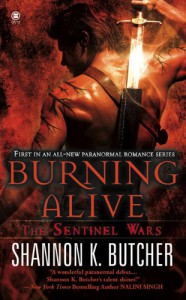 Burning Alive is an interesting book to recap because my reasons for liking it are not the norm. The characters didn't really grab me, and I can't say that the story was one of the best I'd read recently (although it was still fun). Even so, the book had me on the hook right off the bat by throwing me right into the action, and the character origins were different from your average pnr. In a genre of similar stories, I feel myself getting excited anytime something comes along that makes me say, "huh...hadn't seen this before."The only downfall was that my ebook document seemed to have been missing a couple of chapters in the middle, and I think I completely missed the big love scene (so no clue how that went...hah) and came back a little confused and had to fumble around for a little while before figuring out what was going on. I probably should have gone and loaded another copy, but I was being lazy on the couch and was able to get back into the story quick enough that I wasn't going to stress over it.This book had such an impressively strong start. It felt like I was immediately thrown into the story without having to go through a bunch of painful world building, which is always a plus. So many PNR's/UF's start with such a slow build that I'm debating whether to throw in the towel by page 50.There's nothing new to the concept of warriors or soulmates, but the sentinal world felt fresh to me. This is a pnr/sci-fi hybrid, in which alien warriors inhabiting earth are killing demons. Whoda thunk it? I wasn't wow'ed by the main characters in the book, but found myself invested in a few of the side characters and can't wait to see how their story goes in future installments. I will absolutely be continuing with this series.
Tweet