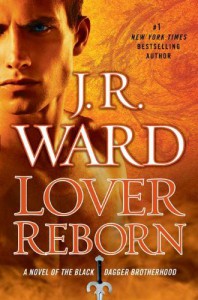 3.5 stars. I didn't realize how much I'd longed for Ward's guilty-pleasure goodness until I picked up Lover Reborn. It was like taking a shot of adrenaline to my reading mojo. Thank goodness everyone knows these books have a HEA for the main characters (that's happily ever after for those not familiar with the term), so I won't be spoiling anything by putting (for the first time ever!) the last sentence of a book into my review : On that note, he kissed his female...and bit into his Big Mac. YES. I missed my boys.I am one of the rare few who appreciates the latter books more than the former ones in this series. Even though Rhage and Z (books 2 and 3) will continue to remain some of my favorite "love stories," I am much more content with the transition of the series from straight PNR into a PNR/UF hybrid. One of the best features of this expanding world is how the lives of all of the Brotherhood have become intertwined. They live together, fight together, and share their struggles with one another. BDB now has more to offer because of its expanding to become something other than just a set of basic alpha-male love stories. It's too bad that those who were put off by the extreme cheesy testosterone of the first installment (probably the weakest in the series outside of Phury's book) never got to see the series hit a good stride.Did I say I missed my boys already? I did? Well, here's some more reasons why :"I'll teach the fucker to read," V muttered. "By cramming the Library of Congress up his ass.""Scotch? Gin? Bourbon?" the angel asked. "I'm having an Orgasm."Tohr rubbed his face. "Can you never say that word around me when you're buck-ass nekkid?"That set off a round of, "Orgaaaaaasmmmm, orgaaaaaaasmmm," to the tune of Beethoven's Fifth."Aha!" Lassiter pointed at the boob tube. "You motherfucker! I knew you were the father!"Tohr fought the urge to slap some sense into the son of a bitch. His future was at stake, and this dumb-ass was worried about Maury's paternity tests? "Are you kidding me?""No, I'm damn serious. Bastard has three kids by three sisters - what kind of a man is that?"Mild spoilers ahead for those who haven't read the book yet. High Points :1. Lassiter - snarky angel who watches Maury = good stuff2. Offbeat humor - one of Ward's strengths as a writer3. Layla/Xcor/Throe - picture me with a raised eyebrow4. Tohr - not as much to say here but I'm glad he got a chance to healLow Points :1. Pop culture references - there are still an over-abundance of these. I was starting to wonder if Ward was getting sponsored by all the brands, music, and items she mentioned. This is the stuff that dates the books. I'm letting Maury slide though because that was too perfect.2. Tohr and No'One/Autumn's reunion. It was pretty yawn worthy. I'm a bit annoyed that he couldn't have had his MINE moment with her. I guess it's not the same when there's no bonding scent?3. John and Xhex - their drama dragged on for far too long.4. Sexy time - when it was good, it was good. When I thought it was needed, it wasn't happening.
Tweet