River Cast (The Tale of Lunarmorte #2) 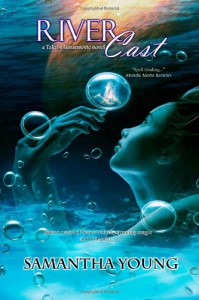 3.25 stars. Book 2 takes the action and adventure up a notch. Where Moon Spell felt more like a paranormal romance, this second installment in the Lunarmorte series brought a little bit of an edgier urban fantasy vibe to the table. I found the story of the war and oncoming power shift to be a nice addition to the mix. Our female lead Caia struggled with her own beliefs and had to make hard decisions about who she was going to be, even if it meant standing up to the people who had been crucial in shaping who she had become. It was good to see her take action and lean on her own instincts above all else. Were there still tales of love to be read? I'd have to answer with a resounding yes. I rather enjoyed the two separate romances in this book. One couple was powerful, stubborn, and explosive. The other pair was patient, kind, and sensitive to one another. I appreciated the contrast in relationships, since not all relationships come about in the same manner.Lucien and Caia encountered a few stumbling blocks on their road to happiness. Misunderstandings and hurt feelings held them back from giving in to what their hearts wanted. In a way, this was a good thing, since their love was the "hit you over the head" type in book 1. Because the intensity was dialed down a bit in this chapter, we were able to see more of who Caia was as a person, and not just who she was with Lucien. The second couple - I won't say who it is, but I will say that I liked them much better than Lucien and Caia. Their relationship seemed more realistic to me. Even though I didn't write much of a review for Moon Spell, I did have a few complaints with Lucien and Caia in book 1, mainly having to do with Lucien being a bit overbearing (which I gave a bit of pass to because he is an alpha - literally). Thankfully, he seemed to have gotten a bit of a grip on himself as the story progressed.My only real complaint (and this is probably nitpicking), but I wasn't vibing on the notion that all paranormal races (everything from fairies to vamps to shifters) came from the gods - as in the mythological Greek gods. It's like throwing too many ingredients into the soup pot. I'd rather see one (or two) races with their own identity, than see everything under the sun being attributed to something else completely, and all of it somehow being related. I'm not a details nerd, but I want a backstory that somehow makes a bit of sense. As well, I've never been a fan of stories which use their mythological foundation as the basis for their swear words. I don't really want to see "goddess, Gaia," etc. thrown around in everyday conversation. I'd rather see nothing at all instead of subbed in words. Especially when the guys are doing it too...talk about odd...I can't say this is the best shifter or paranormal series I've read but I can say that the books so far have been pretty impressive for an indie effort and aren't a bad deal for as cheap as they are. There are some minimal typos (I have the original version though, so this might have been fixed with the newer release) and a few small cliches which could have been avoided, but overall, I enjoyed the read. To me, this series is better than the much-hyped Nightshade trilogy. I hear the third book is the best of them all, so I'm looking forward to it.
Tweet