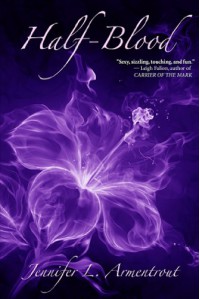 More VA similarities come out here and here. And that's not even my entire list of similarities. I just got tired of marking them all (because there were so many) when it started getting down to them both having rose necklaces as a significant thing and other random little details sprinkled throughout just about everywhere.*edit* July 2012*. Sigh. Eff it. I really didn't want to have a star rating on this book because of my mixed feelings (good and bad) but since I'm not risking having yet another review sent to the void, I will award a star rating. *edit* March 2012. I have since removed my star rating because I don't know the fair way to rate this book anymore. If you've read either Half-Blood or Vampire Academy (it doesn't matter which one) this review will basically be spoiler free because you'll know what's going on from reading either book when I do my comparison. If you haven't read VA, then I'd suggest skipping this review altogether and picking up a copy of Vampire Academy. Do yourself a favor and read the original before deciding whether or not to read this. It's the only fair thing to do. Mead deserves credit for creating this world.*edit* January 2012. After having three different discussions about this book in the past few days, I'm tempted to erase my entire review. I wrote it with hope that there must have been a reason for the similarities. Now, I'm pretty sure that the author isn't claiming this as fan fic, when that's what it reads as. I tried to see the positives. I really did. ~ Original Review from 2011 ~This has got to be fan fic?I can't imagine that someone would blatantly rip-off the entire premise of Vampire Academy without it being some form of fan fiction. I would say at least 85% of the story was ripped from VA books 1 and 4, and the other 15% was given a Percy Jackson-like twist.I read the book because I was craving a Mead fix, and missing Dimitri something fierce. And this book delivered on that at least! Actually, I forgot after a while that we were dealing with offspring of the gods because when you have races like pures (moroi), half-bloods (dhampir), and daimons (strigoi), as well as jobs like sentinel (guardian), servant (blood whore), and lazy upper class (royals), all taking place on a remote island school (remote vampire academy), it's easy to forget that we're NOT reading VA. Did I mention that there is a Rose, a Dimitri (right down to being the guardian/sentinel trainer), an Eddie, a Mia and a semi-ish Adrian character? Okay, well there you go. It's VA. Did I also mention that there was a crazy strigoi daimon hunting our lead female? Yep. Crazy, I know.*edit* to also add that there were similarities between Alex/Aiden's scene and the lust charm scene in VA 1, as well as Rose/Alex wanting to train with real weapons instead of fake. I'm going to stop now before I start thinking of every single scene that was similar.BUT...I actually liked the story. I was engaged the entire time and never bored once. However, I'm not sure if this was because I already knew what was going on, so I didn't have to learn anything about the world, making it easier to get into right away. Heck, I may have even liked it a little bit better than VA book 1 (blasphemy, I know, especially considering how much of a Mead fangirl I am) because a lot of the world building was pushed back in favor of more action. If I was rating this book based on story alone, I'd easily go 4 stars because I enjoyed it that much. However, since there was nothing NEW about the story (oh wait, the two Apollyons twist...hah), I can't in good conscience go that high. So I'm thinking 1 star for originality. Not even one thing about the mythology was new. I'd read it all before in other books, and some of it felt like I was rehashing Percy Jackson (especially the part with the oracle).So uh...yeah. I really liked the book! I can't wait to read the next one! Let's hope it branches off into something completely different so I can go higher on the rating because I really did like the author's storytelling, fresh characters errr...writing style. Yeah, that!
Tweet