Mine Till Midnight (Hathaway Series #1) 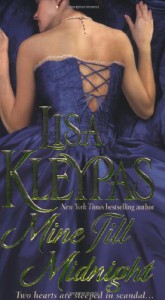 As a huge fan of the YA Gemma Doyle series (starting with A Great and Terrible Beauty), this book immediately sucked me in because like the GD series, it also was set in historic London and had a Gypsy hero. Kartik in GD is one of my all time favorite heros, and because of that, I was giddy to meet Cam Rohan in this book. Cam was handsome, well-dressed, but still had a bit of the rebel in him due to his wild upbringing. I finally got to have an itch scratched that was never fully taken care of in GD due to the YA rating. If anyone has a cigarette to pass my way, please do so.Obviously, the story wasn't the same, but I enjoyed delving into the world of the Hathaways nonetheless. Amelia Hathaway was a bit trying at times (as I've never been fond of the spinster heroines), but she came around. Guess that's going to happen when a stubborn, cocky man is determined to break you. My favorite scene involves Cam pulling Amelia in for a kiss, and cutting the ribbon off her bonnet while she's completely unaware, just because he wanted to have the one thing that showed her youth and rebellion (the ribbons were red - so scandalous!).I will be reading on in the series, especially to find out what happens between Win and Merripen.
Tweet